I had to make a quick trip to Korea because of visa issues. Well I’m back in Japan and I can’t say I had a great trip, but it was fun. Under different circumstances it would have been much better. Scroll down for photos.

Anyhow, last Wednesday I flew from Kansai to Incheon airport and stayed the first night in the Calla motel. Finding a motel and buying train tickets was insanely hard. There is no direct train from Seoul to Incheon so most people take busses. Being the train geek I am I figured that I’d fair better heading into town by train. Mistake. Next time, I’ll take the bus. It’s not that the train is any longer or anything like that, its just not as convenient it seemed.

On this trip I realized how all the typical work I put in before a trip helps. I had to take a few moments to get my monetary bearing, and realizing which coins were really worth something. This was fun because I came into Korea blind. But also blind as far as language. Yea there was some English, and a few bits of Chinese and Japanese that could be helpful, but I had no clue how to read Korean. Unlike travel in Western Europe where the script is not an issue, and I could figure out the meanings of signs in Korea I was completely blind. If I went to China or Taiwan my bad Japanese could have helped me read some of the signs, and it would have been more familiar seeing all of the Chinese characters around me.
I eventually found a hotel for my first night after walking through a maze of side alleys in a love hotel district. The Lonely Planet recommended 4 different places in this area, but the first two didn't seem that appealing. All of the hotels had the car privacy curtains typical of love hotels in Japan. I eventually found the Calla hotel walked in smiled, nodded, and got a room. Well it wasn’t as dirty as some of the places I’ve seen in the US it was actually pretty nice, besides the broken air conditioner. What I liked the most about this hotel was it’s TV. In the US I love hotels because I watch TV in them. Cable TV, I might add. Korean TV was great. I was able to watch the AFN (Armed Forces Network) for American forces based in Korea. No commercials, but very strange PSA’s including one about suicide awareness on base. But the best was some other channel that was airing a CSI marathon in English with Korean subtitles! I had a wonder TV night with some Korean beer and connivence store snacks.
The next day I started on a route of tourist sites, but my body wasn’t up for it. After walking through the nearby park. Famous because a Korean independence document was read there during the Japanese occupation. (The sign out front explained this in English, Chinese, and Japanese.) The park was nice, but I gave up on the palace and headed to the Lotte department store where I had the Korean Lotteria. WOW! It’s nothing like the bland Lotteria that we get here in Japan, McDonald’s was better there too. I feel so deprived.
After the department store I got back on the train and decided to spend the night near the airport and go to the deep sea water bathhouse mentioned in the Lonely Planet. This also let me travel by boat in Korea as I would take the train to Incheon city then the ferry to the island the bathhouse and airport are on. The harbor was eerie and like many other harbor fun areas around the world that I’ve seen. Anyhow, I took the boat and free bus to the sadly empty sauna. It was a huge building and only 5 men shared the deep sea water with me. It was a nice sauna, and if I ever had a long stop over in Incheon I’d take another bath break. That night I stayed at a business hotel near the airport, had yakiniku, and a beer at bar where I spoke in Japanese to the staff that didn’t know much English.

The next morning I took the airport shuttle bus to the airport checked in, bought some omiyage and came home, I mean home to Japan.

Coming into Incheon airport and heading into downtown Seoul by train at night the most common symbols are present in the landscape are the neon crosses coming out of all sorts of buildings and the hot bath symbol that in Korea doubles as the hotel symbol. Koreans put a wet paper towel, or a bit of water in the bottom of their ashtrays. People selling all things possible where ever possible. I posted a ton of other photos up on my flickr. Click here for the set.
No comments: 今晩ローズマリーとスン・ドライ・トマトパスタを作った。本当おいしいかった。
Tonight I made rosemary and sundried tomato pasta. It was really yummy!
Recipie / 料理法
5 comments: IMG 8809
Originally uploaded by sleepytako.
Dead pigeon in my neighbors balcony in the rain.

I watched it die in the rain on Thursday morning before I went to work. I think it was looking for a place to get away from the rain.
1 comment: IMG 8436
Originally uploaded by sleepytako.
Photos from my day trip from Sanda to Kinosaki onsen I took last month.

I rode the trains for 5 or 6 hours for one hour in an onsen. Plus I got drenched by the rain getting back to the station. Oh ya, and lots of delays on the JR. But a fun trip. Kinosaki has a local brewery that makes some really good beers. I went to Kounoyu. Nice place, if a bit small. It has a great outdoor bath with a good few of the green hills. DSC00041
Originally uploaded by sleepytako.
This high-school student in Sanda likes to take photos of gaijin on the trains. Beware. He has a funky studded belt and a pink Puma gym bag. I'm sure he's put all his gaijin photos online, so I'm gonna put his up. 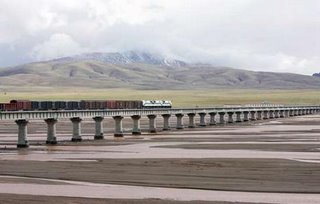 I recommend today's Outlook program from the BBC World Service about China's new railway to Tibet, the highest railway in the world. 5,5000m high half the height of a cruising airplane. The line includes the world's highest tunnel.

On today's Outlook Heather Payton travels on the new Qinghai to Lhasa railway that links China and Tibet. The railway is the highest in the world, going up to a maximum height of 5072 metres. This means that passengers are at risk of suffering altitude sickness - which is why the train is equipped with medical supplies and oxygen. It also means that the railway is an incredible feat of engineering because much of it is built on permanently frozen ground known as permafrost - in fact many people thought that, due to the harsh environment at that height, it would never be built. However, special methods were used to chill the ground below the track to keep it stable. Heather speaks to people who were involved in the building of the railway, who work on the train, and people travelling to Tibet, to find out what they all think of this extraordinary new railway across the roof of the world. IMG_8688
Originally uploaded by sleepytako.
I made my self a nice old dinner the other night. Start with a hunk of tofu, firm. Press that, set it up on a place as shown. Chop up some garlic, saute that for a while. Add some cheap thin cut meat, I used some pork that was on super sale. As the pork cooks add what ever liquids you have around the house. I added mirin, soy sauce, sesame seed oil, rice vinegar, ponzu, and the non-liquid sugar. I let the meat cook in that stuff for a while then added kimchi and the veggies I had in the apartment: green onion and bean sprouts. Once that’s all good glop it on top of your tofu and munch down. My tofu to meat and stuff ratio was a bit off but still good. I forgot to top it with nori and sesame seeds.
1 comment: