One of the nice things about Japan is that there is always something to explore. Someplace to go. I love flipping through Mapple's railway maps of Japan. Extremely useful for any train journey throughout Japan--even if your command of the Japanese language might not be as good as you wish it was. Flipping through the pages of the Kansai edition, I found a third sector railway line that I hadn't ridden yet.

Third sector lines like the closed Miki Railway or its neighbor the Hojo Railway are former JR lines that were slated for closure after the split up and privatization of Japan National Railways in the late 1980's. Like the two lines mentioned above municipalities ended up buying and running the lines instead of letting them die. Some like Miki Railway have eventually proven to be too much of a drain on the local coffers and ended up closing.

The Shigaraki Kogen Railway or KTR has stayed in operation since being jointly bought by the city and prefecture in which it runs. Thankfully KTR allows access to a touristy area based around the local pottery industry adding to its ridership.

I rode up the short 14km length of the KTR's one line on a cold snowy winter's day. The cold desolate landscape reminded me somewhat of eastern Montana. I enjoyed watching at the small, almost inconceivable, stations pass by along this one-man line.

Matching the areas fame for pottery KTR sells a clay tablet ticket that I didn't have the chance to buy since I had already paid for my paper ticket. I'm not the kind of guy to pay for a ticket twice. Maybe next time. It would make a great addition to my office wall.

Because I was short on time and it was really cold out, I decided to take the next train back to Kibukawa station where the line starts and intersects with the JR and Ohmi Railway lines to continue my train journey for the day. I'm planning on going back to Shigaraki, although by car, the next time my mother comes out. I think she'll enjoy looking at the pottery shops there.

KTR is also infamous for a fatal accident that occurred along the line in 1991 killing 42 people and injuring 614 others. One of Japan's deadliest railway accidents.
2 comments:

UPDATE Saturday, 19th 18:15 (JST): Added the video.
Along the Hankyu railway tracks next to Tsukaguchi station in Amagasaki there was a rather large fire that burnt down 2000 square meters of commercial buildings. The Tsukaguchi Chuo Market consisted of a few restaurants and food stalls all of which burnt down by my observation. There was a small standing bar in the market which I had been to a few times. The fire was first reported to authorities sometime after 2AM Friday morning. Danger from the fire along with the hoses and firefighting crews blocking the tracks lead the Hankyu Kobe line to be delayed for over an hour. Once trains started running again at 6:30 the stations were full of passengers waiting to get to work. They were also only running local trains. It only took me a few more minutes to arrive at my job, but it took a coworker over an hour to complete a 20 minute commute. For the both of us and all of the people heading into Osaka from Kobe, got a taste of the Tokyo commute this morning. It was packed, painfully so. Thankfully no one was hurt or killed in the fire although 20 people living in nearby buildings have been evacuated. The cause is still under investigation.

The Hankyu trains are still running slowly or off schedule. Please be aware of this if you're traveling along the Kobe line today.

It's Cold and Snowing. 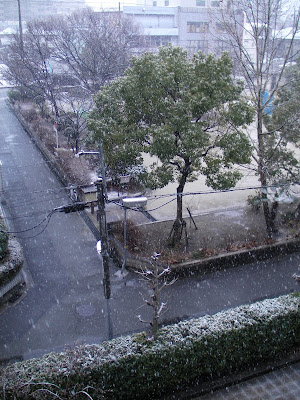 I haven't seen snow this heavy in my neighborhood since 2005. Surprising and cold. I'm looking forward to going home in this weather.
1 comment:

Here are what I think were my best photos of the last year. With the baby coming and changing jobs 3 times, I didn't get much photo time in. Looking at Lightroom, I took 800 less photos than I did in 2009. Also most of those photos I took this year were of little Mia.

Hopefully I'll be able to get out and get some more shots in 2011.

Mumblings of an Old Man - マヤンの呟き Not so cheap sake...

I got this buckwheat (soba) shochu for my birthday. It's worth it for the bottle and the name, but the taste is wonderful.

It smells like straight alcohol but with a subtle whiskey smell in the background. Somewhat spicy.
The first thing that gets you when you sip it is the thick, slippery mouthfeel. A bit oily.
The favor has a sweetness, but not as sweet as some shochu. It's the most scotch tasting of any shochu I've had. The kick in the aftertaste is pleasantly strong.

I've had it straight or rocks. Both good.