Sorry I had to shut off the webcam before Yuko got to the party. There were way too many people. Thanks to everyone who came we had a great time, and thanks to Wexford Tavern and staff for hosting the party. Photos will be up soon.
1 comment:

If you're coming to our Wedding Party Tomorrow...

Here is a map of Coin Parking lots dear the Wexford Tavern.
こちらはWexfordTavernの近くのコインパキンーグの地図です。
大きな地図で見る
We are looking forward to seeing everyone there tomorrow night!
1 comment: The mechanism that changes the curve of the track to allow the cars to move from the inbound track to the outbound track is astonishing. Watching what should be a straight solid object can bend and move like that was beautiful. You can't assume every line is unbroken.

My previous pair of glasses, which I got maybe 4 years ago, were getting well beyond old and the coating on the lens had begun to peel off. So two days ago I decided to head out to get some glasses after work. I didn't know what to expect seeing that this will be my 4th pair of glasses. I first starting wearing them my senior year of high school. A quick google search brought up this blog which recommended the Japanese retailer Muji, a brand that I like. Free eye check, only an hour, only about $100, I was amazed.

I headed to the Umeda Loft Muji store because I had seen another eyeglass store near by. Getting there I found another store making a total of 3, including Muji, in a short distance from eachother. (Map Here) Prices seemed to start around 6000 yen for a test, frame and lenses. Speical order or uncommon lenses will cost more, and of course some of the more expensive frames were around $200. Still very cheap.

I was able to find some classes fairly easily. I ended up buying a pair at Muji for ¥10,500 out the door. The test didn't take a long time and was done very professionally. These glasses are much better than my older pair, although they took a few hours to get use to. The lenses I got are smaller than my older pair, but the frame was big enough to get around my melon of a head. The hardest part was chooseing the right frame and color. I was helped by a very sweet lady that kept asking me if I was sure if I wanted black or blue. I suck at choosing things like this. She said the blue made me look more 明るい (bright), so I went with blue. It took them 1 hour to fit the lenses then a few minutes to adjust the frame. 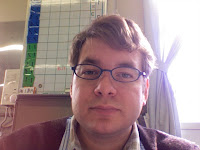 A note for those who go: if you don't speak Japanese at all it might be best to bring a Japanese speaker, but basic Japanese can get you through. During the test there will be lots of compairative questions like "which one is clearer" and commands like "read the second row from the left" which wasn't hard at all for me. Also remember the reading test is in hiragana.
2 comments: Eiden Demachiyanagi station
The Kansai 3 Day ticket is a great bargain if you enjoy trains or want to explore parts of Kansai you'd never get to othewise. It allows 3 days of unlimited travel on most private railways and buses in the Kansai area. Tourists coming from abroad can buy the ticket anytime, (English homepage) but residents of Japan can buy and use the ticket only during certin times of the year from most major train stations in Kansai for ¥5000. (Japanese homepage) It's currently the fall period for the pass (11/1~12/7) and I picked one up. I've got a silly goal of riding all the private train lines in the Surutto network and taking this beautiful to Mount Hiei route I got a few of those lines finished. The pass covered all of the trains except for the Eizan cable car and rope way which cost ¥840 one way.

View Larger Map
My route
I started my trip by taking the Keihan main line to it's terminus at Demachiyanagi (出町柳) station. From there I changed to the Eiden (叡電) main line. Although now wholly owned by Keihan, Eiden keeps it's own idenity. Eiden is a small local line that operates on the street, much like the Hankai line in Osaka and Sakai. You pay when you exit the cars, but some of the larger stations also have turnstiles. Very Berry Cafe
I had lunch at the Very Berry Cafe that was featured in Surutto Kansai's free magazine. The decor was Hawaiian/Americana and the sandwich was great. I've marked the location on the map at the top of this post. It's a 5 minute walk from Ichijoji station. A looking down the Eiden lines The river between the train and cable car stations.
At Yase-Hieizan-guchi I changed to the Eizan Cable and Ropeway. (Japanese Homepage) The cable car takes you 561 meters / 1,841 feet up the side of Mount Hiei. The greatest vertical interval of any cable car in Japan. Don't hang your feet (out the window) please The view looking down
Between the cable and the ropeway stations on the side of the mountain there is an abandoned ropeway car along the hiking path adding to the mountain's atmosphere of age and wonder. Also adding a bit of fear. I like seeing things from ropeways, but I always imagine the rope breaking and the car falling to the ground. Thankfully there was charm for the ropeways safe operation in the car. A cloudy view of northern Kyoto from the ropeway
At the top of the mountain there is a garden, a bus stop and view of lake Biwa and Otsu city that was blocked by the cloudy weather. A cloudy view of Otsu city
I took the bus 5 minutes across the mountain to the entrance to Enrakuji and the Sakamoto cable car. Enrakuji was once one home to one of the most powerful Buddhist sects in Japan through influence and proximity to the emperor until their temple and monk army was destroyed by Oda Nobunaga in 1571. The temple and mount Hiei were also mentioned in the Tale of Genji. Enrakuji's home page also offers "virtual driving". Concrete and Nature between Enrakuji and the Sakamoto cable car station The Sakamoto Cable, built in 1927, is the longest cable car route in Japan and the station at the top of the hill looks like it hasn't changed since it was built. It's yellow brick and interior accents make this one of the most beautiful buildings I've seen in Japan. The ride takes you through some dense forest, past a waterfall and through a tunnel along it's route. Highly recommended, and covered under Kansai 3 day ticket. The Sakamoto cable car station
From the base station of the Sakamoto it's a nice 10-15 minute walk to the Keihan Sakamoto station where I took Keihan back to Kyoto, changing trains at Hamaotsu station.

Without taking breaks for looking at the temples and not including getting to the Kyoto area from my home in Nishinomiya, I was able to complete the route in about 5 hours, but to really enjoy everything a full day would be required.
2 comments: In Osaka you don't eat food, you feel it.